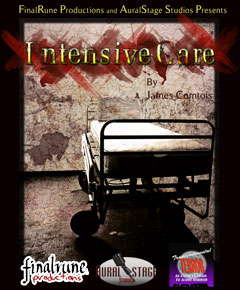 For the fifth year in a row, FinalRune Productions will be releasing an original horror story on Halloween; the twist this year – a new collaboration with New York-based Aural Stage Studios.

“It’s kind of tradition,” says FinalRune Producer Fred Greenhalgh, “Halloween always is a time of heightened interest in radio drama and we love the ritual of developing a new show to celebrate.”

This year’s show is Intensive Care, by New York playwright James Comtois. The show involves Alex, a young man who finds himself in a run-down New England hospital following a car accident. Strange conversations from patients and staff make Alex realize that no one ever seems to make it out of the hospital alive… and that his condition may be more critical than he first believed.

“We’re always eager for a road trip, and recording a new radio play seemed the best excuse I could imagine,” said Boudreau, who plans on packing a walker, stethoscope, and blood pressure kit among other props for the recording sessions.

“The world of audio production and new media is constantly evolving,” said Samantha Mason, “and this is the perfect opportunity to experiment with new styles of recording, bringing the strengths of both our companies to the table with James’ script.”

“As a community, modern audio drama producers have continued to seek ways to celebrate each other’s work and collectively build an audience,” Greenhalgh said, “To us, Halloween is better than Christmas… every year we prove that monsters created by your own imagination are just as frightening as anything produced in Hollywood.”

Tune into the show at 8PM October 31st at: http://transcontinentalterror.com/when-to-listen/ or on participating stations: WKIT and WMPG in ME, WRFA-LP in NY, WFHB in IN, and WKNO in TN. The show will also appear on FinalRune and Aural Stage’s own websites.

Some Photos from the Production: