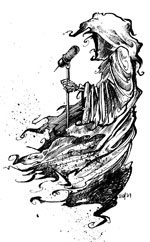 Hear this bone-chilling audio experience in its entirety:

See photos from this production.

The Stories in the Show:

Ghost Behind the Black Door:

Losing You is Hell

WMPG, Portland, Maine’s community radio arranged for the venue and provided the live stream and radio broadcast of this show.

The show was a fundraiser for WMPG’s PowerUP! Campaign, which seeks to raise $250,000 to upgrade the signal strength of the station’s main transmitter and move it to a better location.

If you like this show, don’t miss the chance to donate to WMPG! We hope to bring this show back in 2010.