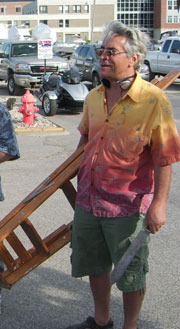 William Dufris hails from Houlton, Maine, though his journey as an actor has taken him long and far from “The County” of Maine. Today he lives and works in Cape Elizabeth, Maine as a celebrated professional audio narrator. He also produces his own audio theater with Mind’s Eye Productions, including the chilling collection of Nightmares on Congress Street.

Fred first met Bill while still working on Day of the Dead, and has had the pleasure of seeking him out for advice from time-to-time, hanging out with him at the National Audio Theater Festivals’ week long workshop, and at last being able to work with him in “Waiting for a Window,” where Bill portrayed the marvelously dopeish yet cunning old sea salt, Rob.

William has been nominated six times as a finalist for the APA’s prestigious Audie Awards, as well as having garnered 18 Golden Earphones Awards through AudioFile Magazine. He was also honored by AudioFile as being one of “The Best Voices At The End Of The Century”.

He has also acted on stage and television here in the US, as well as in the UK and Europe. William is best known as the original North American voice of the cartoon character Bob (and Farmer Pickles/Mr. Beasley/Mr. Sabatini) in Nickelodeon Jr’s popular children’s show, Bob the Builder.