Photos of the audio geeks rocking at #CVG2012 held July 5-8, 2012 in Minneapolis, MN.  What happens when you mix incredibly large amounts of alcohol and 24 audio geeks together for a few days surrounded by Darth Maulers, bad ass chick superheroes, 8-bit monstrosities and occasional time travelers. 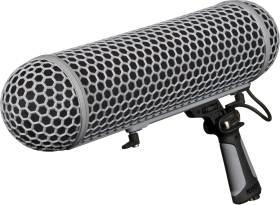 As I’ve reported in my prior article on recording in the field, I happen to love Rode gear – their mics are a great combination of affordability and quality, and the delicious, roomy, field recorded sound you hear in the latest FinalRune shows are largely a result of the Rode NT4 mic.

One of the things that troubles the NT4, and practically every mic when in the field, is handling and wind noise.  There’s a foam cover that comes with the NT4 but nothing that will protect you from even modest winds (and we’ve had this thing out on islands off the coast of Maine where it was wailing on us).

We’ve gotten this far using an improvised “blimp,” consisting of a pencil canister, a paint roller handle, rubber bands and a bunch of feather boas, but it really seemed about time to up the ante… And so we ordered two very nice new items from Rode – the Rode Blimp, and the Rode mini boompole.

We expect to really, really like these two new toys.  We’ll do a before/after comparison on the goodies once they arrive from Sweetwater.

A Promise of Spring

For those of us so blessed to live in the temperate regions, the time of year is here again where scent, sounds and light reappear after an austere winter. Feet’s worth of snow has melted off, leaving mud and muck and a silly grin that warm days are coming after all.

So while it’s tempting to lose oneself in eager planning for outdoor adventure and projects (you should see the garden we’re planning this year!) it’s also a great time to focus on growth of the audio medium. And it’s been an eventful time for that, as well.

In the month of March I had the incredible pleasure of traveling to Ireland to meet Roger Gregg, stay in a 17th c. historic stone manor, romp around the countryside and be chased by sheep. The ideas birthed by that trip have turned into a series of meetings since returning home and are now are being to shape into new projects. Portland, Maine is a small city, to be sure, but one where numerous refugees from the DCs, NYCs, and LAs are heading to enjoy the good life and bringing incredible talent with them.

So despite the depression and funk that most of the world seems to be in right now, here at FinalRune it’s only joy, adventure, and free spirit. But then again, we do what we do because we love it, not because we expect (or have ever gotten) a paycheck.

A Trip to Ireland

I’d been dreaming of a trip to Ireland since I first learned of Roger Gregg’s involvement with the Gaiety School of Acting’s weeklong radio acting workshop.

The plan was to arrange a trip to correspond with that course and participate in some way. While Plan A didn’t work out, the window of opportunity worked out between work schedule, money, and frequent flyer miles, so rather than go somewhere lame with palm trees, it was to Ireland beautiful Amy and I headed to for our spring vacation.

While no one will accuse Ireland of being tropical, it was a fair shade warmer than the last throes of our Maine winter. Trust me, being able to stretch the legs, see some spectacular scenery, and hunker down for a proper pint in a traditional pub was nearly worth the trip itself. But wait, there’s more.

Roger was an incredible gracious host, taking us on a tour of RTE studios and to a Gaeity School of Acting devising workshop dress rehearsal. We spent much time at restaurants, cafes, pubs and clubs discussing the radio arts, where they are, where they’re headed, what makes it good, and what fun projects the future should hold.

It’s far too early to say anything official, but Roger and I batted around several ideas for collaborative opportunities and maybe one or two of them will actually pan out.

Suffice to say, it was a huge treat to see Roger’s studio, get a whole pile of Crazy Dog schwag, and see Dublin through the eyes of a local (man did I wish I knew this town was out there when looking for colleges!). Thanks again Roger, and hope to see you again soon, on this continent or another.

Tune into Radio Drama Revival to hear Roger’s latest work, The Heart of Morphine, and to hear an exclusive “fireside chat” held in his Dublin studio.

Just before my trans-Atlantic trip I was charged with the task of coming up with content for my regular show, Radio Drama Revival. I already was running an episodic program (the pulp war adventure Order is Orders), but since my absence fell on the station’s semi-annual “Begathon” fundraiser, I wanted something a little bit special.

And so it was that my first short shorts were created, with me stabbing out in no particular direction except to involve the theme of begging for pledges. I took as much inspiration as I could from Tom Lopez’s 2 Minute Film Noir and Chillin’ Cell Phone Theater, and ended up, I hope, somewhere completely my own.

And heck, even if it wasn’t original, it was a lot of fun, and special thanks to FinalRune regulars Philip Hobby, Joe Duley, and Charly Duley for stepping in on a Sunday afternoon to get it all done. This was the first show I’ve ever recorded and produced in a day, and I think they make it through the frenzied production schedule rather well.

But give it a listen to see for yourself. You can listen online at Radio Drama Revival.

FinalRune to Be Haunting Halloween

Previously I’ve mentioned that the next coming show will be Lullaby Canyon, an adventure through the underworld through the lens of Southwest mythology. While this will be the next “official” FinalRune story, that doesn’t mean there won’t be more stories in the meantime!

There are a few particularly exciting FinalRune projects in the works, the biggest being our first live stage show to be held on Halloween. WMPG is in the midst of raising money for a new transmitter (bringing the signal up to 4500 watts — which will add close to 100,000 listeners!), and what better way to rally support around the radio than to host a one of a kind event?

So we’re looking at a 90 minute show live at an auditorium at the University of Southern Maine, which will also be broadcast live over the air. All proceeds from the event (ticket sales and such) will go directly to help the station, and the show will be re-broadcast ad infinitum over the web free-of-charge. Though web listeners will be most welcome to help out the station with a donation themselves.

What will listeners hear? I’ve been increasingly encouraged to steer away from suspense in favor of comedy, and we will most assuredly hear an adaptation on one of Roger Gregg’s works from Crazy Dog Live (where I’m going to find all the live SFX whiz-gigs is yet to be determined). I will be coming up with a script myself, and to round out 90 minutes, I’ll be looking for one more script, preferably from a local writer.

If you’re in the Portland, Maine area (or feel like a drive to this lovely neck of the woods) mark your calendar now for 7-9PM on Halloween. It will be a once-in-a-long-time kind of experience!

And that’s it. Thanks for reading another edition of RuneScapes.

You’ll get another one of these as soon as I’ve got something else I’m ready to share with you, and don’t hesitate to contact me with anything you’d like to talk about — great story ideas, remarks on the craft, things you’d like to see, amazing opportunities I’m failing to see, or profane visions of the sacred.

Fred Greenhalgh
The Ridiculously Optimistic One