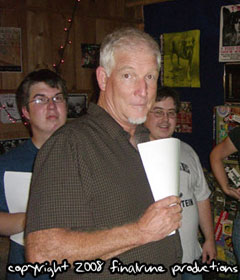 Chris Newcomb is an actor, storyteller, author, musician and teacher residing in Portland, Maine. It’s rather convenient that he goes by the name of “Man,” since after he and Fred bashed around the draft script for a while, Fred came to conclusion that an anxious, desperate man named Man should urge Norman to leave the island.

Chris was a perfect fit.

As an actor, Chris has had many roles on stages throughout Maine
including: Penobscot Theatre, Mad Horse Theatre, Acorn Productions, Portland Players, Auburn Community Little Theater, and The Theater Project. He has been in numerous commercials in
Maine and New England most notable include: Oakhurst Dairy, Hannaford Bros., Bangor Hydro,
Central Maine Power, Maine Dept. of Tourism, Irving Oil, and Bangor Metro.

As a storyteller/musician Newcomb has found himself on many stages throughout New England. His
song Superman, co-written with Jose Ayerve and produced by the band Spouse, aired on This
American Life (NPR).

Chris is dedicated a lot of his acting energy lately to Yikes! Monsters, a new Portland-based theater troupe who make wacky, off-center tales to get you to think. The group recently appeared on Fred’s radio show, Radio Drama Revival.