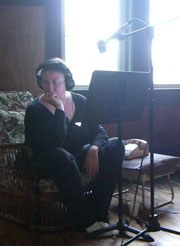 Christine Louise Marshall is the Artistic Director of the Mad Horse Theater Company. She first joined FinalRune in the unforgettable role of the bedridden neurotic Mrs. Stevenson in the re-creation of the radio classic, Sorry Wrong Number.

Christine rejoined us in the live Halloween radio drama in multiple roles – the pushy Irish-American writer, a sassy woman in a New Orleans bar, and a frightened woman trapped in a car battered by zombies.

In her theater life, Christine has been seen most recently in the role of Mrs. Lincott in “The History Boys” and has directed and acted in numerous shows for Mad Horse. She is known to work hard – and not even for the money.