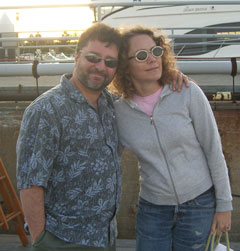 Joe Duley recently moved to Maine with his wife Charly Duley to escape the hustle and bustle of Washington, D.C., though apparently was caught unsuspecting of the killer moose, man-eating mosquitoes and tweaked out radio producers that inhabiting the Pine Tree State. It was with great gusto and good humor that he joined FinalRune in the role of the beaten-down traveler Davey in the most recent production, Waiting for a Window.

Joe has a hell of a resume in Radio/TV/Film Production, including experience with XM Satellite Radio, WRNR 103.1; The Sailing Channel and various video productions throughout Washington DC, Baltimore, and New York City. Additionally, from 2000- 2005 he contributed to BBC Radio Wales in the UK, and continues to consult and collaborate with independent producers and writers in England and Wales.

Joe claims to “have seen it all,” though we hope that through his experience with FinalRune he’s seen a little bit more…