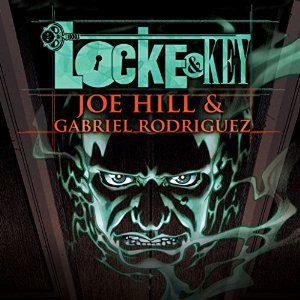 FinalRune Productions, working with AudioComics, for Audible Studios, is pleased to announce the release of LOCKE & KEY, an epic audio saga based on the acclaimed graphic novel series by Joe Hill and Gabriel Rodriguez, and published by IDW.

This lavish production was recorded on-location throughout New England in a creepy old farmhouse, underground cavern system, on the beach, in the woods… and wherever else the story took us.

Featuring TATIANA MASLANY of BBC America’s Orphan Black, HALEY JOEL OSMENT (The Sixth Sense), and KATE MULGREW (Orange is the New Black and Star Trek: Voyager) in addition to a cast of over 50 actors from New England, the UK, and the NYC division of the Upright Citizens Brigade, this 13+ hour audio drama encompasses the entire six book arc detailing the tragedy that brings the Locke family to the aptly-named Keyhouse in Lovecraft, MA, where they face an evil entity seeking the power held in a very unusual set of keys…and one in particular that could bring about the end of the world.

Adapted by Elaine Lee and Fred Greenhalgh, directed by William Dufris, and recorded on location utilizing the site-specific recording techniques pioneered by Fred Greenhalgh/FinalRune Productions, LOCKE AND KEY is one of the most ambitious audio drama productions undertaken by an American audio production company.

LOCKE & KEY is a visceral, gritty experience and so what better way to record the audioplay than in an actual, honest-to-goodness spooky house in Maine and in other appropriate locations, such as underground catacombs (in the mills of Biddeford, Maine) and out in the woods?