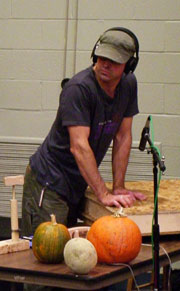 Paul Drinan is a founding member of several radio theater companies including Portland Radio Theater and the critically acclaimed Rocky Coast Radio Theater and has been a guest artist with Minds Eye Productions.

Paul has performed on stage, screen and even in fields. While acting in New York, Paul studied with Jodie McClintock, Terry Schreiber and Patsy Rodenberg.

Paul is also a sound effects virtuoso, and joined us in our inaugural live Halloween radio drama in 2009 as the lead sound effects artist. His responsibilities included the creaky doors and floors in an old house, screaming souls in hell, ghosts plunging up from underneath frozen lakes, and zombies devouring human flesh (and being beaten into bits with a bayonet).