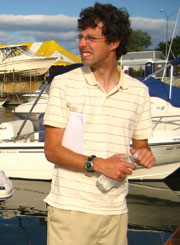 Philip Hobby is a radio drama lover and performer in Portland, Maine. A FinalRune regular, he’s performed a range of roles that have had him cramped into a studio space with a half dozen other actors, belting at the top of his lungs, screaming while a pumpkin pretending to be his head was smashed in with an axe, and being an eerily overly-friendly sea-dog while persuading Norman to stay on a lazy tropical island. Most recently, he spent a glorious recording session out on the gorgeous Goat Island playing the freakish erstwhile thespian trapped in a lighthouse.

Philip is also an actor on the stage. Recently he has starred as Hysterium in A Funny Thing Happened on the Way to the Forum (Dir. Jaclyn Bedell) and starred as Howie in the Space Gallery’s production of Stephen Karam’s Speech and Debate (Dir. Sean Mewshaw). He was also in the semi-improvised piece Making a Scene (Dir. Grace Overbeke) at Portland Stage Co, and had a small role in the online television series Willard Beach, The Real Story 2.8 (Dir. Kate Kaminski) . He recently starred in Honolulu Freight Co.’s short film Stuck. Philip also acts in, provides impressions for, and writes for Freeport’s Radio series (Dir. John Albright).

Philip Hobby is also musician in the area. He currently sings with the St. Mary’s Schola