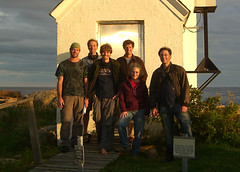 On September 13 FinalRune completed field recordings for our latest effort, a re-creation of classic OTR tales done in collaboration with the Mad Horse Theater Company… And it was rad!

FinalRune’s dedication to field recording sent us to some interesting locations on this one… “The Most Dangerous Game,” a story of a hunter who becomes the hunted, was recorded at Mad Horse’s new theater space in South Portland and in the woods behind producer Fred Greenhalgh’s house. “Sorry, Wrong Number” was also produced at Mad Horse’s space, using a large room and an improvised sound booth. The classic tale of terror, “Three Skeleton Key,” was recorded on-location at Goat Island Light, a charming lighthouse just off the coast of Cape Porpoise, Maine.

Tons of photos of the shoot are available on FinalRune’s Flickr Page. Look for the first of these productions to be released on September 24!