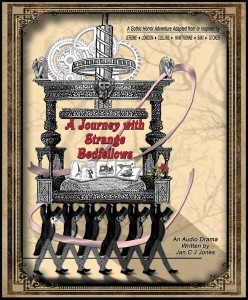 Forest Rose Productions and FinalRune Productions have joined forces to produce a four (4) part episodic Gothic horror audio drama that is a “mash up” of six (6) lesser known classic short stories.  “A Journey with Strange Bedfellows” was conceived and written by writer, Jan C.J. Jones as adapted from (or inspired by) immortal works written by literary masters Nathaniel Hawthorne, Bram Stoker, Jack London, Jerome K. Jerome, Wilkie Collins, and Hector Hugh Munro (aka, Saki).   The primary intent is to re-introduce classic works to tween-agers, 12 years of age and up.

Set in the late 1800s, the Jules Verne-esque story of “A Journey with Strange Bedfellows” follows the main character, Hunter Brown, on a quest to secure true love as he searches for mysterious Faith Geibel, the young woman of his desires.  The harrowing journey begins in Victorian Great Britain, moves to Paris then eastward to Hungary and finally, to western Romania(former Transylvania).  After overcoming insurmountable odds, and grave personal loss, Hunter must make the ultimate sacrifice to remain in Faith’s existence.  Socially shy and a bit uncertain, Hunter becomes a determined man with purpose and great inner strength over the course of his journey.  There are twists and turns, surprises and plenty of blood.  The dark fantasy falls into the increasingly popular science fiction “steam punk” sub-genre where an alternative history has determined steam to be the main power source.  Timeless Gothic horror themes and elements are an inescapable constant that implores listeners to experience the tale by candlelight, with protective bedcovers safely secured.

The eventual objective for the project is for the audio drama to be paired with a graphic novel in support of literacy curricula in schools and penitentiaries, to support English-as-a-second-language programs; to incite a curiosity for, and rekindle an interest in, classic literary masterworks.   The 80 minute audio drama is scheduled for release as four, 20 minute episodes this fall in time for Halloween.

More information about “A Journey with Strange Bedfellows” can be obtained through Forest Rose Productions at 719.487.0435 or email at ForestRose1 @ aol.com.  ( www.forest-rose-productions.com )

Founded in 2003, and located in Monument, Colorado, Forest Rose Productions (www.forest-rose-productions.com) produces high quality projects that provide entertaining, educational, and/or thought-provoking presentations that meet the growing demands of a broad audience.  Its credits include co-producing The Walt Disney Company’s (Buena Vista Home Video) Disneyland’s 50th Anniversary Treasures series’ feature, “Disneyland: Secrets, Stories, and Magic of the Happiest Place on Earth,” among others.  Company owner and executive producer, Jan C. J. Jones, has specialized in writing for media since 1990.  She’s earned credits ranging from a variety of theatrical presentations and multi-media presentations to short- & long-form video projects.  Although Jones is an award-winning writer, she has also received two (2) Telly Awards for video editing.  Another original project awaiting its turn at Forest Rose is an interactive iPad adventure, “The Adventures of the Last Jellybean Dragon.”  (www.jbdragon.com)

Located in far-south Maine, FinalRune Productions (www.finalrune.com) is owned and operated by award-winning audio production veteran, Fred Greenhalgh who will co-produce and direct “A Journey with Strange Bedfellows.”  As one of the world’s most active and prolific episodic audio producers, Greenhalgh’s endeavors were featured in The Wall Street Journal article written by Barry Newman titled, “Return With Us to the Thrilling Days Of Yesteryear—Via the Internet.” Greenhalgh’s company strives to honor the tradition of classic radio while raising the bar on the art form by utilizing modern technology and audio innovation. To date, Greenhalgh has completed an impressive number of audio dramas, along with 370 episodes of “Radio Drama Rivival” (www.radiodramarevival.com).  Having studied film production in New Orleans before returning to Maine to found FinalRune, Greenhalgh likens audio drama as “movies of the mind” that compel listeners, based solely on sound, to use their imaginations to envision a story.  Greenhalgh’s appreciation of technological innovation extends to his personal life living “off grid” as an online marketer for leading Maine solar power and solar hot water installer, ReVision Energy.  He recently returned from Lesotho Africa where he volunteered his time and skill as a solar systems installer.

FinalRune Productions has tapped seasoned voice actor, William “Bill” Dufris of Mind’s Eye Productions(www.mindseyeproductions.com) and AudioComics (www.audiocomicscompany.com) to assist with casting and sound engineering.  Having garnered 21 Golden Earphones Awards through AudioFile Magazine, Dufris was also honored byAudioFile as being one of “The Best Voices at the End of the Century.”  Dufris spent 13 years in London where he was afforded a variety of opportunities in voice performance, ranging from language tapes, film & cartoon dubbing, commercials, audiobooks and BBC Radio Plays.  Dufris has shared the mic with Kathleen Turner, Sharon Gless, Stockard Channing and Helena Bonham-Carter, among others. He founded three (3) audio production companies, has acted on both stage and screen, and is best known in the U.S. as the animated character voice of “Bob the Builder.”