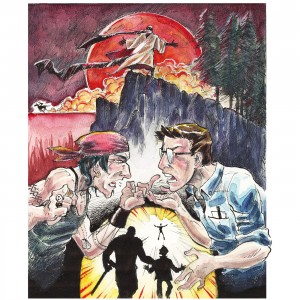 Fifteen years after the fallout of a massive energy crisis, steadfast homesteaders in rural Maine slog through an off-grid life.

This bucolic existence is turned upside down when John Prophet, a soldier still fighting an unwinnable war, arrives with word of a powerful military force setting up in the ashes of old New York. His message falls on deaf ears except for those of two youths, Maria and Luke, who buck their parents’ wishes and set off on a journey filled with grim survivalists, rugged characters, religious maniacs, and dangers of nature that have grown up in this strange land.

Use the SoundCloud player below to stream on-demand any of the audio from this epic 5-hour drama. To own it, buy it through Blackstone Audio’s Downpour.com, the distributor of FinalRune’s shows. Or, chec out the free podcast which allows you to listen to the series incrementally.